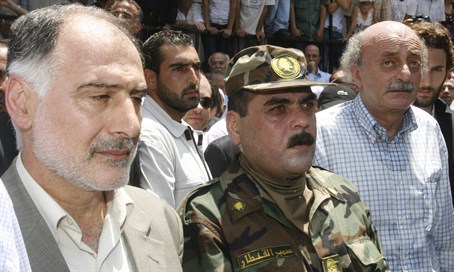 The Free Syrian Army (FSA), one of the rebel groups fighting Syrian President Bashar Al-Assad’s regime, on Monday claimed that it was responsible for the assassination of Hezbollah terrorist Samir Kuntar in Syria, the Al Bawabanews website reported.

In a video it released, the rebel group rejected Hezbollah’s claims that Kuntar was killed in an Israeli airstrike in the suburbs of Damascus, saying that such allegations are aimed at “making light of the FSA’s achievements.”

“They are also aimed at raising the morale of its mercenaries,” said the FSA fighters in the video adding, “We vow that all of your actions are being monitored and you will not be spared from our future strikes.”

There is, obviously, no way to verify the authenticity of the video nor that of the claims being made by the group.

Kuntar, who was buried on Monday, is notorious for the 1979 murder of three Israelis, including 31-year-old Danny Haran, and Haran’s four-year-old daughter whose head he smashed on a rock with his rifle butt after killing her father in front of her. The girl’s two-year-old sister was accidentally smothered to death by their terrified mother as she stifled her cries to prevent them from being discovered.

Kuntar was released in a prisoner swap with Hezbollah in 2008.

Hezbollah was quick to blame Israel for the attack on a residential building in the Jaramana district of Damascus in which Kuntar was killed. On Monday, Hezbollah leader Hassan Nasrallah gave a televised speech in which he said, “There is no doubt that the Israeli enemy conducted this assassination, this is not an incident that needs to be investigated for who conducted it.”

“We reserve the right to respond to this assassination at the time and place of our choosing. We in Hezbollah will exercise that right,” he threatened.