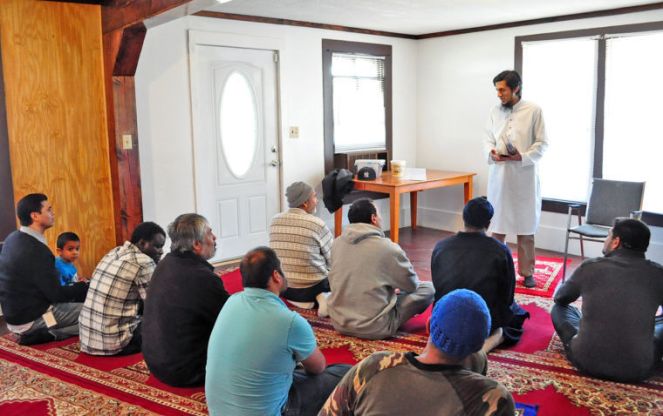 Yep, because a congregation this size certainly needs a great big mosque.

A roomful of Culpeper County citizens cheered wildly Tuesday morning when Supervisor Bill Chase made a motion to deny a request from the Islamic Center of Culpeper for a pump & haul permit to serve an envisioned mosque to be built on Rixeyville Road.

Chairwoman Alexa Fritz banged the gavel in response, declaring, “There will be no clapping or hooting and hollering! This is a business meeting – we are going to keep it civilized.”

“It looks like discrimination to me,” he said, “This country is a great country with the right to practice your religion and freedom of speech. I have two businesses in Culpeper. I live over here, and I don’t have any place to worship God.” Nawabe said he planned to get a (CAIR) lawyer to determine his next step.

“What they did to me is not right,” he said. “I have to go forward to get what I need to get done.” Nawabe felt the board denied the Islamic Center of Culpeper’s request not because of local and state laws dictating pump & haul permits, but because of the narrow thinking of “small country people.” (‘Small country people’ who understand the threat posed by a jihad training center in their neighborhood)

Culpeper County board members voting against the permit stated they did so out of compliance with the law.  “I’m dead set against this – not because of religion, but because of use,” Chase said. (Wink Wink) Counter-terrorism expert, John Guandolo, instructor of a recent seminar for the Culpeper County Sheriff’s Office, “Jihadi Networks in America,” claimed that the primary Muslim group CAIR opposing his class is associated with the terrorist organization Hamas.

Guandolo’s statements to the receptive crowd included: 1) that CAIR has shut down similar training for federal agencies; 2) that the Muslim Brotherhood and other groups are leading an organized effort in the U.S. to harm Americans and overthrow the government; 3) that the top 20 Muslim organizations in the U.S. are part of Hamas; 4) that the Islamic advisor to President Bill Clinton was a senior financier for Al-Qaeda; 5) Hamas is actively holding weapons training the U.S. and 6) the mission of the Muslim Brotherhood in America is to destroy Western civilization from within by launching “a grand jihad.”

Fritz, representing the Salem District, voiced a different motive behind the denial that included pressure from constituents. She shared a cell phone photo she took Monday of a sign hung on a house in her district stating, “No Islamic Center.” The sign listed the date of Tuesday’s meeting and Fritz’s name and address. “To me, that’s hate,” she said. (Ya think?)