Will France soon forbid the ringing of Notre Dame’s bells? It happened already in Boissettes, and on the outskirts of Metz, where the bells of the church of Sainte Ruffine have been forced by the state authorities to keep silent. Meanwhile, the muezzin’s calls to Islamic prayer continue to broadcast.

French Catholicism is now witnessing a tragic decline, caught between two fires: state secularism and political Islam.Le Figaro wondered if Islam can already be considered “France’s prime religion”.Muslim countries are generously funding France’s mosques, covering an average of 50% of total costs.”Avignon is no longer the city of the Popes, but of the Salafis. … They [Muslim extremists] urge us to rewrite the history of France in the light of the ‘contribution of the Islamic civilization'” — Philippe De Villiers, author of Will the Church Bells Ring Tomorrow?The trend indicates that in France, there are currently three young practicing Muslims for every young practicing Catholic.”It is conceivable that Islam is overtaking Catholicism”. — Osservatore Romano, the Vatican official daily newspaper.

A new book is shaking France. Les cloches sonneront-elles encore demain? (“Will the Church Bells Ring Tomorrow?“), by Philippe de Villiers, is shattering the nation. France, the “eldest daughter” of the Catholic Church, is instead turning into “the eldest daughter of Islam“. “With arrogance, they [Muslim extremists] urge us to rewrite the history of France in the light of the ‘contribution of the Islamic civilization'”, de Villiers states.

De Villiers points out that:

“France has experienced many misfortunes in its history. But for the first time, it must face the fear of disappearing. In France, there are two groups: a new people who move with pride and an exhausted people, who are not even aware of the conditions needed for their own survival”.

De Villiers paints a grim picture of French Catholicism: “Avignon is no longer the city of the Popes, but of the Salafis”. In Saint-Denis, where the French kings and Charles Martel are buried, “tunics and beards now dominate, and girls are dressed in the Islamic shrouds”. If a parish is still alive there, it is thanks to the zeal of the Christian community of Africans and Tamils. “The Kings’ cemetery is just one enclave. It belongs to a story that does not count anymore”.

The bell towers of the churches in de Villiers’ book are already growing silent in Boissettes(Seine-et-Marne), and on the outskirts of Metz, where the bells of the church of Sainte Ruffinehave been forced by the state secularist authorities to keep silent. It happened in the Breton village of Hédé-Bazouges, where silence is filled by the sound of what de Villiers calls “the clergy in the djellaba” [outer robe worn by North Africans] — the muezzin’s call to prayer. It is happening everywhere in France. 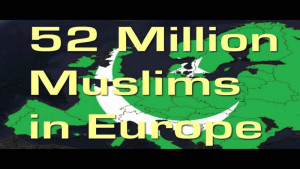 The same is true for the construction of new religious sites. There are nearly 2,400 mosques today in France, compared to 1,500 in 2003: “This is the most visible sign of the rapid growth of Islam in France”, according to the weekly magazine, Valeurs Actuelles. Almost two new mosques are built each week: that is the pace of expansion of Muslim places of worship in France for the last 10 years. The record is held by Corsica: in 2003 there were no Muslim places of worship, now it has 11.

Muslim countries are generously funding France’s mosques. Foreign funding covers an average of 50% of total costs: for the Grand Mosque of Strasbourg, 37% came from Morocco, 13% from Saudi Arabia and Kuwait. At Roissy-en-Brie, the Sultanate of Oman contributed 1.8 million euros, or two-thirds, of the budget. In Marseille, Qatar will provide 25% of the funding.

Charles Adhémar, a French political scientist, also commented on the “de-Christianization and gradual Islamization of France”. The picture over the last year has been devastating: A Catholic priest murdered inside a French church by Muslim extremists; Muslim leaders who call to convert empty churches into mosques; Christian faithful dragged from Paris’s churches before they are demolished. Even Lourdes, France’s most famous Catholic site, lies in crisis because of the shortage of pilgrims.

French Catholicism is now witnessing a tragic decline, caught between two fires: state secularism and political Islam. “In forty years, France has become the nation in Western Europe where the population of Muslim origin is the most important”, wrote the Osservatore Romano, the Vatican’s official daily newspaper. “It is conceivable that Islam is overtaking Catholicism”.

That is why for 45% of French Catholics, Islam represents a “threat“. That is why for the last few years, a growing number of French intellectuals, mostly secular authors, published books raising the alarm on this religious outstripping.One author is Pierre Manent, who in the book La situation de France writes that “we are witnessing the extension and the consolidation of the domain of Muslim practices rather than its shrinking or relaxation”.

Another is Éric Zemmour, public enemy number one of the French left; he just penned a new book, Un quinquennat pour rien (“A Five Year Term for Nothing” — quinquennat is the five year term served by France’s president), in which he calls for “a cultural revolution that can afford only to win the war of civilizations taking place on our land”.

A renowned sociologist of religion, Danièle Hervieu-Léger, also published a book that sounds like a verdict: Catholicisme, la fin d’un monde (“Catholicism, the End of a World“). Hervieu-Léger makes up her own word to describe this end: “exculturation”. It brings to mind not a battle that is taking place but one that is already finished.In the fight between “the cube and the cathedral” — the Arche de la Défense built in Paris by François Mitterrand as a symbol of modernity, and the Cathedral of Notre Dame — the cube is overtaking the church. Both are dominated by the Islamic crescent.